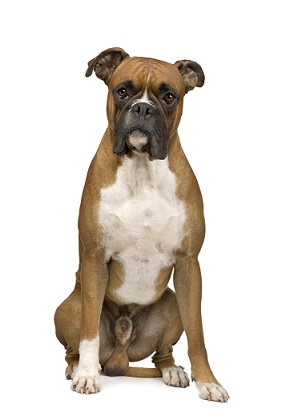 The best dog insurances for your Boxer

The Boxer is a medium sized, smooth coated, sturdy dog of compact, square build and strong bone. His muscles are taut, strongly developed and moulded in appearance. His movement is lively, powerful with noble bearing. The Boxer must be neither cumbersome nor heavy, nor light or lacking in body substance.

GET A QUOTE FOR YOUR Boxer

The Boxer should be fearless self-confident, calm and equable. Temperament is of the utmost importance and requires careful attention.

The small, so called Brabant Bullenbeisser is regarded as the immediate ancestor of the Boxer. In the past, the breeding of these Bullenbeissers was in the hands of the huntsmen, whom they assisted during the hunt. Their task was to seize the game put up by the hounds and hold it firmly until the huntsman arrived and put an end to the prey. For this job the dog had to have jaws as wide as possible with widely spaced teeth, in order to bite firmly and hold on tightly. A Bullenbeisser which had these characteristics was best suited to this job and was used for breeding. Previously, only the ability to work and utilization were considered. Selective breeding was carried out which produced a dog with a wide muzzle and an upturned nose.