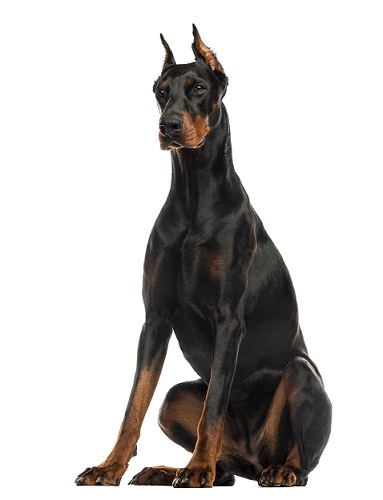 The best dog insurances for your Dobermann

The Dobermann is of medium size, strong and muscularly built. Through the elegant lines of its body, its proud stature, and its expression of determination, it conforms to the ideal picture of dog. The Dobermann became very popular over a short period of time. It is a relatively new breed, less than 150 years old.

GET A QUOTE FOR YOUR Dobermann

The disposition of the Dobermann is friendly and calm; very devoted to the family. Medium temperament and medium sharpness (alertness) is desired.

The Dobermann is the only German breed which bears the name of its original breeder, Friedrich Louis Dobermann (02.01.1834 – 09.06.1894). He was believed to be a tax collector, offal abattoir manager (knacker) and a part time dog catcher, legally able to catch all stray dogs. He bred with animals from this reservoir that were particularly sharp.

The so called “butcher’s dogs” which were already considered a relatively pure breed at that time, played a most important role in the origination of the Dobermann breed. These dogs were an early type of Rottweiler, mixed with a type of shepherd dog that existed in “Thüringen” as a black dog with rust red markings. Mr Dobermann bred with this mixture of dogs in the Eighteen Seventies. Thus he obtained “his breed”: not only alert, but highly protective working and housedogs.

They were often used as guard and police dogs. Their extensive use in police work led to the nickname “Gendarme dog”. They were used in hunting to control large vermin. In these circumstances, the Dobermann was recognized officially as a Police Dog by the beginning of the 20th century.