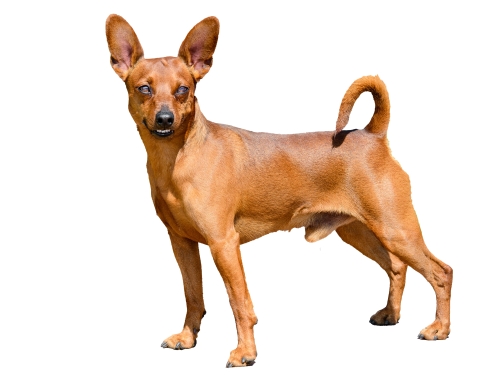 The best dog insurances for your Miniature Pinscher (Zwergpinscher)

GET A QUOTE FOR YOUR Miniature Pinscher (Zwergpinscher)

Black and tan or solid (red)

The origin of the miniature pinscher dates back to the 18th century in German lands. What is not known for sure is the variety of races involved in its birth. One theory bets on the cross between English greyhounds, dachshunds and terriers. Meanwhile, the other party bets on an origin based on crosses between manchester terrier and toy.

Like the Andalusian winemakers, the purpose of the miniature pinscher was none other than to eliminate rodents and shrews from the German farms of yesteryear. The meaning of his name translates to ‘teether’ and, given his character, it suits him like a glove.

The Miniature Pinscher is a curious, intelligent and open-minded dog with a great need to move. Despite its small size, it is an attentive and persistent watchdog with a low stimulus threshold. The dog is initially suspicious of strangers, but quickly gains confidence. If there is lack of education or too little exercise, he may bark and tends to be nervous.