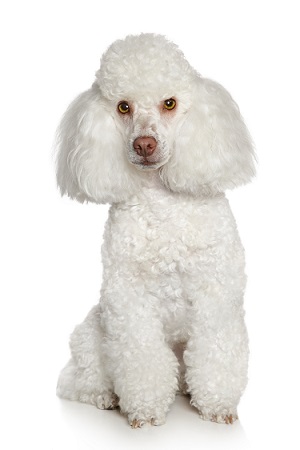 The best dog insurances for your Poodle

Dog of medium proportions, with a characteristic frizzy coat which is either curly or corded. The appearance is that of an intelligent dog, constantly alert and active, harmoniously built, giving an impression of elegance and pride. Poodles are known as a highly intelligent, energetic, and sociable breed. They require both physical and intellectual activities. Ranked second most intelligent dog breed just behind the Border Collie.

GET A QUOTE FOR YOUR Poodle

A dog renowned for its loyalty, capable of learning and being trained thus making it a particularly pleasant companion dog.

Etymologically, the French word "poodle" comes from "cane", the female duck. In other countries, this word refers to the action of splashing. In its origins, this dog was used to hunt waterfowl. It descends from the Barbet, of which it retains many characteristics. In 1743 it was said "the poodle": female of the Barbet. Then the Barbet and the Poodle were to progressively separate. Breeders strove to obtain original, uniform-colored specimens. The poodle became popular as a companion dog thanks to its friendly, jovial and faithful character, but also thanks to its four sizes and its different colors, which everyone can choose according to their preference.

They are considered an active, obedient and intelligent breed. The Poodle or Poodle is easy to train, it takes few repetitions of a command to understand it. It is helped by being a particularly sociable breed, although for the same reason it does not take too well the absence of its owners.

As a particularity, this breed has a medium or long and very curly coat, so daily brushing is recommended. Thus we avoid accumulation of dirt and keep the diseases that they can cause at bay.