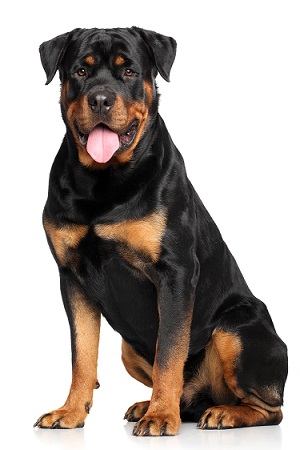 The best dog insurances for your Rottweiler

The Rottweiler is a medium to large size, stalwart dog, neither heavy nor light and neither leggy nor weedy. His correctly proportioned, compact and powerful build leads to the conclusion of great strength, agility and endurance. Potentially dangerous behaviour in Rottweilers usually results from irresponsible ownership. It is for this reason that breed experts declare that formal training and extensive socialisation are essential for all Rottweilers.

GET A QUOTE FOR YOUR Rottweiler

Black with clearly defined markings of a rich tan on the cheeks, muzzle, throat, chest and legs, as well as over both eyes and under the base of the tail.

Good-natured, placid in basic disposition and fond of children, very devoted, obedient, biddable and eager to work. His appearance is natural and rustic, his behaviour self-assured, steady and fearless. He reacts to his surroundings with great alertness.

The Rottweiler is one of the oldest breeds. Its origin dates back to the Roman times. At that time, it was owned as a protection and livestock driving dog.

These dogs moved with the Romans beyond the Alpine regions, where they protected people and drove livestock.

In the Rottweil region, only specimens were crossed with the native dogs, of which a mixture emerged. From then on, the main task of the Rottweiler was to care for and drive larger cattle and defend their master and their possessions. His name: "Rottweil Butcher Dog" was obtained from the ancient imperial city of Rottweil. Butchers raised it only according to its yield and utility. This is how, over time, a breed of protection and excellent driving was formed, which was also found useful as a traction dog.

When dog breeds were sought out for law enforcement in the early 20th century, the Rottweiler was tested. It was quickly proved that this dog was perfectly suited for police duty. That is why in 1910 it was officially named as a police dog.

Despite their totally energetic appearance, they are still a very noble race.

Ask for a free quote at Petplan from less than 1€ per day.