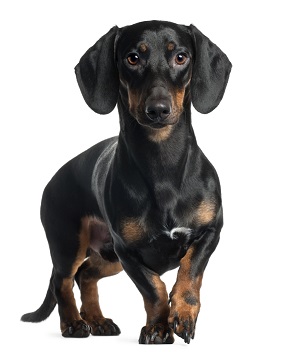 The best dog insurances for your Teckel (Dachshund)

Low, short legged, elongated but compact build, very muscular with cheeky, challenging head carriage and alert facial expression. His general appearance is typical of his sex. In spite of his legs being short in relation to the long body, it is very mobile and lithe.

GET A QUOTE FOR YOUR Teckel (Dachshund)

Red, reddish yellow, yellow, all with or without interspersed black hairs. Deep black or brown, each with tan or yellow markings.

Hunting dog above and below ground.

Friendly by nature, neither nervous nor aggressive, with even temperament. Passionate, persevering and fast hunting dog with an excellent nose.

The German Dachshund , also called Dackel , Dachshund or Dachshund , is a canine breed especially recognizable for its elongated figure and short legs. This mutation, called bassetism, has become a fundamental and main characteristic of this breed.

The origins of Dachshund date back to the Middle Ages, close to the territory now occupied by Germany. The crossing of bloodhounds, possibly of pointer and pinscher varieties to create a hunter specialized in venturing into burrows, resulted in a dog of short stature and not particularly fast, but very useful as a tracker, which earned him a position among the favorite races of European monarchies.

In 1885 the breed was registered with the American Kennel Club and shortly after, in 1888, the Deuche Tekelklub e.V was founded, the first breeding club dedicated exclusively to Dachshunds .

The Dachshund in its three sizes (standard, miniature and for rabbit hunting) and in any of its three coat varieties (hard, long or short) is a friendly perfect companion to have at home due to its small size and good temperament, but we must not forget its origins as a hunting dog and its need for exercise, since obesity is a risk factor for this breed due to its long spine < / p>