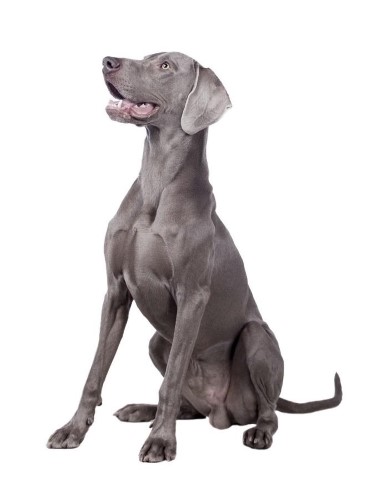 The best dog insurances for your Weimaraner

Elegant and slim. Shy, very loyal, intelligent, submissive, active and active. Weimaraners are not an independent breed and love to be with their owner, never leaving them alone. This can create very severe separation anxiety in the breed. A Weimaraner requires frequent exercise and will appreciate games and play.

GET A QUOTE FOR YOUR Weimaraner

Good if it gets used to it since its a puppy.

It is not yet clear exactly how the Weimaraner breed came into being and to what types of dog it owes its current appearance. Some theories say that it is the result of the mix between the St. Hubert dog, the English pointer, the German shorthaired pointer and a genetic mutation of this, silver gray. What is certain is that the Weimaraner was bred and used as a hunting dog in the early 19th century.

Its popularity is due to Duke Karl August von Sachsen-Weimar-Eisenach, who kept these elegant dogs in his gardens. Since the official breeding began (1890), the Weimaraner was bred in a pure way, that is, from that moment on it would no longer be crossed with other breeds. This is why it is considered the oldest breed of dog in Germany.

The Weimaraner is undoubtedly one of the healthiest dog breeds with the least predisposition to hereditary diseases. Even so, the Weimaraner is very prone to gastric torsion, so you should avoid exercising immediately before and after eating.

Ask for a free quote at Petplan : from 371 euros per year